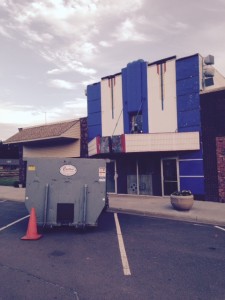 SHORT HISTORY OF THE ROOK THEATER On April 23, 1940, the Rook Theater opened in Cheyenne in a new modern building constructed by its owner, Elmer Rook. This theater was one of the most popular entertainment centers of western Oklahoma. In the 1950s a child under twelve could pay 10 cents for a ticket, 5 cents for popcorn and 5 cents for a pop and have 5 cents left from a quarter. Adult tickets were 35 cents. The Rooks continued with a face lift of a new marquee in 1977. They remodeled inside after a fire in an adjacent barber shop in 1981. It remained under Rook management until June of 1989 when Gary E. Kirk became the owner. The Rook family, Elmer and Richard, managed the theater over fifty years and provided wonderful family entertainment for Roger Mills County and surrounding areas. Since 1989 there have been other owners/managers with Buddy and Brenda Parman,(1994), Dorothy Alexander (2000). Barry and Jymay McLeod purchased the Rook Theater from Buddy & Brenda Parman  Paril 10, 1997 and sold it to Dorothy Alexander February 25, 1999. On June 8, 2015 Levi and Shay Compton purchased the building and have a goal to restore the Rook Theater to “the way it was” by 2016.