Roger Mills County was part of the original Cheyenne-Arapaho Reservation and opened for white settlement by a Land Run on April 19, 1892. Part of present-day Roger Mills County was known as F County, and part was originally in E County (which became old Day County) The people chose the name Roger Mills in a November 1893 election, honoring Roger Q. Mills, a popular Texas statesman. Cheyenne, the county seat, was named for the Cheyenne Indians and had a population of 50 by nightfall on April 19, 1892.

Judy Tracy and LeAnn Brewster are Co=Coordinators for this site

Cemeteries  List of all cemeteries in Roger Mills County together with names of those buried.
Marriage Index  From 1893 to 2009 (2010-2014 coming soon) listed alphabetically Grooms & Brides, including Day County
Early Schools  Listing of all schools in our county including a brief history and pictures where available.
Newspaper Summaries  Brief news compiled from the “Local and Personal Columns”
Obituaries (County Board after 7Sep2015)   Memorial items of deceased people who had a Roger Mills connection
Obituaries (Ancestry Board link through 7Sep2015) Search obituaries of people with a Roger Mills County connection dating back to 1894.
Queries Board – A message board for posting or searching queries pertinent to Roger Mills County.
Towns/Communities  Present and past towns and communities in the county with a history of each.
Books/Media  List of books about Roger Mills County.  Some books are for sale.
Family Research  List of Family Names which have a county connection with an EMAIL address or WEBLINK for further research.
Land Runners  Participants from the Texas line in the Cheyenne & Arapaho Land Run on April 19, 1892.
Contacts/Addresses  Contact information for organizations in Roger Mills County that aid in genealogy research.
Cheyenne Businesses List of businesses in and around Cheyenne, OK
Cheyenne School Articles about the Cheyenne School
Creeks/Rivers Rivers, creeks and streams of Roger Mills County
Biographical Sketches Sketches of people in Roger Mills County
Final Proofs List of people who made Final Proofs in RMC between 1895-1900
Historical Buildings Roger Mills County historical buildings 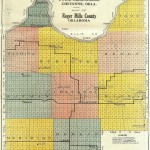 Oklahoma Counties  Links to the Oklahoma genealogy web site which has links to other counties in Oklahoma.
Oklahoma Resources  Contains many links pertaining to Oklahoma genealogy research.
Maps-N-More  County and Township Maps for the entire state of Oklahoma, from territorial days to the present.
Oklahoma Cemeteries  List of cemeteries in Oklahoma including what information is available..
Request an Oklahoma Birth Certificate  Link to the State office where you may obtain a Birth Certificate.
Request an Oklahoma Death Certificate  Link to the State office where you may obtain a Death Certificate.
Oklahoma Funeral Homes  List of present and past Funeral Homes in Oklahoma with contact information.
OkGenWeb Archives  List of organizations in Oklahoma which maintain archives which may be of interest to genealogy researchers.
Oklahoma Land Openings  Information about the land runs in Oklahoma in the late 1800s.
Oklahoma Lawmen & Outlaws  Names and brief histories of lawmen and outlaws significant in Oklahoma history.
Oklahoma Marriages  Links to the marriage index pages of counties in Oklahoma.
Southwestern Oklahoma Genealogical Society  A site where you may place a query and/or read other queries.
USGenWeb Special Projects Specialized projects to collect data that goes beyond county and state lines
USGenWeb Archives Local and state records
WorldGenWeb Contains important resource and reference information that will help you trace your family history.
OKGenWeb County All Counties of Oklahoma and Indian Territory

Please notice that all photos on this site are copyrighted by their submitter.

Do not “contribute” any material (including lists and/or photos) located on this site to other websites.